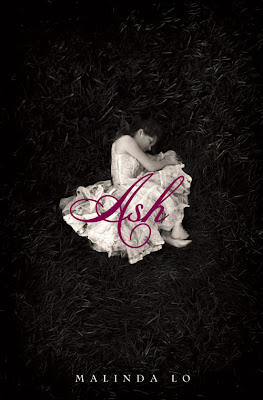 When Ash is around twelve years old, her mother dies and her father dies soon after. But not before marrying a woman with two daughters of her own. Even with a stepmother and two stepsisters, Ash is all alone, for her stepfamily treats her very unkindly and like a servant. And always, always Ash feels the loss of her mother.

Ash inherited her mother's love of fairy tales and she reads stories about how fairies can take people to see their deceased loved ones. Ash seeks out fairies because magic reminds her of her mother and she would like to ask the fairies to bring her mother back from the dead. She finds fairies and forms a very peculiar relationship with one named Sidhean. Sidhean is powerful and more handsome than any man Ash has ever seen. He desires Ash and claims her as his own. Though he and Ash are strange friends/companions for many years, they rarely spend time together. Sidhean claims that Ash is not yet ready to stay with him and his people. However, Ash yearns to leave her hard and lonely life for the magic and beauty of Sidhean and other fairies.

In her late teens, Ash meets the King's Huntress. Kaisa is strong and interesting and very important in the kingdom. She shares Ash's respect for magic and the old ways of the land. As Ash was once completely fascinated with Sidhean, she becomes fascinated with Kaisa. Ash and Kaisa slowly form a very warm friendship. As Ash realizes just how much she and Kaisa care for each other, she finds herself turning away from Sidhean and fairies and magic. She wants to be with Kaisa. But Sidhean has granted Ash two wishes; in return Ash had promised herself to him. Everyone knows that it is dangerous to break a promise made to a fairy.

Ash by Malinda Lo (Little, Brown Books for Young Readers, 2009) is a truly beautiful and unique retelling of Cinderella. It reads very much like a fairy tale and it had me enchanted. Sometimes the descriptions of the sights, sounds, smells, and feel of the weather and the land were unnecessary and overwrought. And Ash and Kaisa's relationship was underdeveloped compared to Ash and Sidhean's relationship. (This is probably due to the fact that Ash and Sidhean knew each other for many years and so many more pages were dedicated to their relationship.) But I couldn't put this novel down. The character of Ash was so well drawn, so well written. She is flawed. She is likable. She grows. She is REAL. Readers will sympathize and empathize with Ash. I deeply cared about her and about what would happen to her, Sidhean, and Kaisa. I also loved how this novel is very much about choosing to be brave and really LIVE LIFE. Even though life can be acutely painful, at least it is REAL. True to fairy tale form, Ash can be considered a cautionary tale about running away from life to escape grief and hardship.

Sometimes fairy tale retellings feel old and tired. Ash feels fresh and the love triangle of Ash, Sidhean, and Kaisa haunts me. The spell of this novel still clings to me.


Why I Imagine the Characters of Ash as Asians

I had thought that I would imagine the characters of Ash as Caucasians because it is based on a fairy tale with very popular versions from Europe and the United States. To my surprise, delight, and relief, I imagined the characters as Asians. Yes, some of the characters are described as having physical features that are not Asian. For example, the fairies have striking blue eyes. But in my mind their blue eyes have smooth eyelids with no folds. Hey, they could be biracial. :o)

I did not think of the lush setting of Ash as somewhere in Europe or the United States. I thought of Japan, Taiwan, and China. There are several reasons why it was easy for me to imagine the characters and setting as Asian and I would like to enumerate them here.

1. I have Asia in my heart and mind.
2. The author Malinda Lo is Asian American. (She envisions Ash and Kaisa as Asians.)
3. I was influenced by this post where blogger Ah Yuan cast Ash as if it were to be made into a Japanese TV drama.
4. I watch a lot of Japanese anime. Japanese anime is full of characters with physical features that are not Asian: blond hair, blue eyes, curly hair, etc. But the language is always Japanese and the characterization, narrative techniques, and themes are always uniquely Japanese. I think of these characters as Japanese.
5. The subtle and painful love triangle of Ash, Sidhean, and Kaisa reminded me of the subtle and painful love triangles in excellent Asian anime and TV dramas.
6. There is tension between magic and philosophy/religion in Ash's land. The people are trying to embrace science, yet are reluctant to completely let go of their superstitions. This sounds a lot like Asia today. In Asia, there are still "negotiations" between tradition and modernity.


[My copy of Ash is an ARC I won from Presenting Lenore. Thank you, Lenore!]