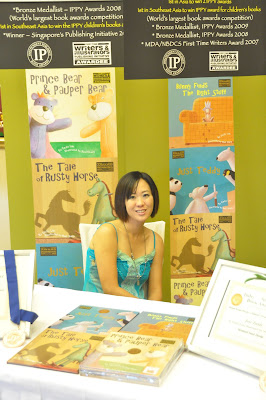 Singaporean Emily Lim is the award-winning author of the picture books Prince Bear & Pauper Bear, The Tale of Rusty Horse, Just Teddy, Bunny Finds the Right Stuff, and Baby Panda Finds His Way - all stories that give readers the warm fuzzies! Here I chat with Emily about her work and children's literature in Singapore.

Why do you write children's literature? Can you please tell us about your path to publication? What keeps you inspired and motivated as a children's book writer?

I started out with children's books as that was the genre under the First Time Writers and Illustrators Publishing Initiative, organized by our Book Council and the Media Development Authority [MDA] of Singapore. Under that Initiative, winners were given a grant to get their book published. I was in between jobs at that time. So I decided to research on the publishing process and publish my own book. I borrowed "how to" books from the National Library and attended a few book conferences to figure how I could do that.

In the process of researching, I discovered a love for picture books because they can distill so much wisdom in so few words. I also received quite a lot of feedback and response from friends and readers on how much they loved my books and how it impacted them in different ways. That fuelled my passion to continue writing.

I noticed that the themes of self-worth and the search for identity are found in almost all of your books. Why do you write about these themes?

When I started writing my picture books, I did not have a specific theme in mind. I simply wanted to write something which could hopefully inspire. I ended up drawing from my personal experiences. It was very subconscious so I only realized it after I wrote the stories.

My first book Prince Bear & Pauper Bear became my "coming out" story. The toymaker had forgotten to stitch Pauper Bear a mouth so he could not speak. But he found love and second chances when a boy brought him home and repaired him. I struggled with speaking when I first came down with Spasmodic Dysphonia, a rare voice disorder. And like Pauper Bear, my voice has since been restored.

The Tale of Rusty Horse is my "acceptance" part of my story. Rusty, an old forgotten rocking horse, longed to be a real horse so that he could be a crowd favorite again. He got his wish granted for a while. But he finally chose to remain a rocking horse to be a friend to a lonely handicapped boy and through that, discovered there was real magic in true friendship. Like Rusty, I too became very concerned with crowd opinion about my voice condition. But I finally realized that being true to myself was the real deal.

Just Teddy is my "realization" story. Teddy went to great comic lengths to fit in with the other toys to the extent of almost losing his identity. Teddy finally discovers that he was a one-of-a-kind bear, "fearfully and wonderfully made", just as I did.

Finally, Bunny Finds The Right Stuff is my "revelation" story. A floppy toy rabbit thought he was missing out on life when he saw his toy friends with a lot more stuffing than he had and went in search of more stuffing for himself. Like Bunny, I felt shortchanged when my life came to a pause by my voice condition and saw my peers move ahead in their careers. But Bunny came to realize that the right stuff was made of love and friendship and that he wasn't short of stuffing but had simply been loved and hugged to bits by the toymaker. And I came to that same revelation.

Actually, I recently launched my first "adult" book, Finding My Voice - a true story of setbacks, new beginnings, and toy characters. It tells of my personal journey, from the time I felt ill to recovery and finding my new voice in writing :)

I would say any children's literature generated locally would constitute Singapore children's literature for me. I'm not sure there is a large enough body of work to date to be able to really talk about strengths and weaknesses. But I would say that we need all the support and funding we can get. There have been recent strides in terms of support, with the First Time Writers and Illustrators Initiative doing a great job in kickstarting several of us into the realm of published writers. The Asian Festival of Children's Content [AFCC] and the Hedwig Anuar Children's Book Award are wonderful initiatives by our Book Council to bring more notice to Asian and locally generated works. The Budding Writers Project by Marshall Cavendish last year is another good initiative to encourage writers from among our young. As one of the judges last year, I had the opportunity to review the shortlisted entries of the students and was amazed by the calibre of their manuscripts, many of which touched on issues of fitting in, bullying and identity. Initiatives like these are much needed to generate more local writing.

Which books would you recommend to readers just getting introduced to Singaporean children's literature?

I like the wide range of topics and writing covered in the winning entries of the Book Council and MDA's First Time Writers and Illustrators Initiative over the years and feel there are many books there which provide a good introduction to our local writing, like that of this year's Hedwig Anuar Book Award winner The Book That Was Handed Down and other titles like I Don't Want Mei Mei Anymore, The Watchtower Warrior and The Little Red Helicopter. The Adventures of Mooty series by Jesse Wee is also a charming series which brings in local elements like the satay man and Mooty's sarong.

I just Googled those books and oh wow, now I really want to read them!

When I first started writing, I was not specifically influenced by any Asian works. I simply wanted to write something universal and meaningful as I didn't know if that would be my first and last book. In the end, I ended up very subconsciously writing from my own personal experiences.

But in preparing for my panel session for the inaugural AFCC in 2010, I did start developing greater interest in Asian works. I would say for picture books, I like Jimmy Liao for the very poetic style of his works - I love The Blue Stone: A Journey Through Life and When The Moon Forgot. One of my favourite books (Asian or otherwise) has to be Totto Chan: The Little Girl at the Window by Tetsuko Kuroyanagi. Those are the types of books I would love to be able to write. I'm probably dreaming big here given how huge these authors are :)

THANK YOU, Emily! I look forward to reading more sweet tales from you. :o)