One morning, Miguel wakes up to find little mung bean seedlings growing out of his ears. "That's what you get for not taking a bath," his mother says quite nonchalantly. Miguel promises to take a bath, but he keeps putting it off so that he can play with his friends. Meanwhile, more and more plants start growing all over his body - a veritable vegetable garden! Miguel starts to panic, but his mother remains cool and calm.

Becky Bravo has written very interesting characters and a funny, immensely entertaining story. Jason Moss' colorful, vivid, and detailed illustrations add even more humor to the book. Just Add Dirt will have children giggling behind their hands, then bursting into loud and hearty laughter. And they just might think twice about not taking a bath....

I'd like to add that Just Add Dirt is also an immensely satisfying read. =D Here's a spread from the book. Click to enlarge the image! (Image provided by Adarna House. All rights reserved.) 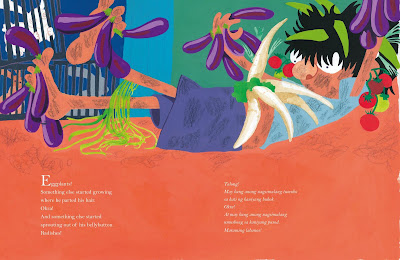 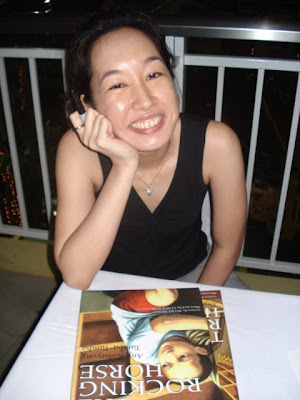 What does winning a National Children's Book Award mean to you?

It's a great honor to be chosen as one of the winners of the first NCBA. There's never before been an award like this created especially for our genre, so I guess I've just made local literary history along with Russell, Gidget, May, Jason, Jomike, Bru and all the other writers and illustrators who were given citations this year. Our community is so small and our influence in the greater Filipino literary scene so minimal that our work has been overlooked time and again by the National Book Awards, so it's rather nice to have our own special awards night to look forward to every year from now on.

I read that your older brother Miguel inspired Just Add Dirt. Can you tell us a little bit more about that story? Does your brother now tease you about having a hand in your award-winning book?

When my brother was a little boy, he hated taking baths so much that sometimes he would go two or three days without taking one. Then my mother or my aunt would happen to notice that he was already grimy, so he'd get sent off to the shower. Back in those days there was a television commercial for Royal Spaghetti in which the tag line they used was 'Royal celebration!', and that was what my maiden aunt (who lived with us and sometimes looked after us kids) would always say whenever my brother came out of the bath.

My Kuya [older brother] is now a well-to-do (and very clean) doctor who lives in Australia. When Just Add Dirt was published last year I emailed him about it and snail-mailed him a copy of the book. He replied that I ought to give him half of my royalty payments. When I emailed him again to tell him that the book was awarded an NCBA, he reminded me about his royalty share again, and now he's thinking of writing a book himself, entitled Miss Fungus Foot - based directly on me and my childhood habit of walking around everywhere with no slippers on.

Here is a picture of Becky with her brother. Yes, he is indeed very clean now! LOL! 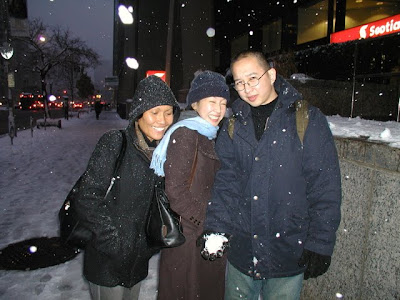 Can you please guide us through the writing process you used for Just Add Dirt?

It's been so long since I wrote that story that I can't really remember what I did step by step, exactly. I just remember that Adarna was asking for story manuscripts dealing with particular topics, and one of them was hygiene. I was immediately reminded of my brother's childhood aversion to bathing, so I went with that. I spent three or four weeks writing the story, adding one or two paragraphs each day that I felt like working on it. I rewrote and edited as I went along, so by the time I got to the ending, all I had to do was give it a once-over. If I remember correctly, I didn't give the story its title until I had finished writing it.

One of the great things about Just Add Dirt is that it has a "lesson," but it doesn't ram that lesson down children's throats. The lesson is secondary to the story. What are your thoughts on books with "lessons" for their young readers?

I think it's a good thing if a book is instructive, but with little kids I think that you have to make learning fun in order to get a lesson to 'stick'.

I'd rather not name a favorite author because I can't claim to be familiar with many children's book authors :) When I was a kid I read a lot of Enid Blyton and Laura Lee Hope (The Bobbsey Twins). If I were to choose from the children's books that I have in my bookcase, I can name a few that I often reread: Roald Dahl's Matilda, E.L. Konigsburg's From the Mixed-Up Files of Mrs. Basil E. Frankweiler and JK Rowling's Harry Potter series. I seem to prefer books where there's humor in the story and the dialogue. I think I try to do the same thing with my own work.

What's next for you?

I'm currently hoping to get struck by a good idea to use for the upcoming PBBY-Salanga contest. It's going to take a lot of staring into space, twiddling my fingers, midnight snacking and biting the nail off my thumb :) 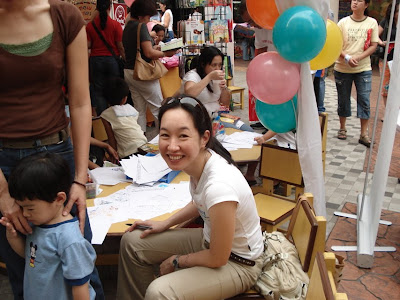 Thank you so much for chatting with me today, Becky. =D

Dear readers, I hope you are enjoying my series of interviews with the winners of the first Philippine National Children's Books Awards!