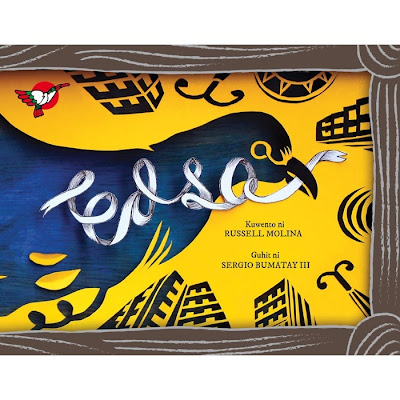 EDSA by Russell Molina and Sergio Bumatay III (Adarna House and the EDSA People Power Commission, 2013) is a picture book done right. It's the story of the Philippines' nonviolent 1986 EDSA Revolution presented as an interactive counting book. Children are treated to minimal text (in Filipino) and iconic images of the revolution, such as radios, yellow ribbons, military tanks, flowers, and thousands of Filipinos united.

Molina used counting because, like counting, the EDSA Revolution was something that started quietly and then escalated. It's brilliant: Gently introducing the EDSA Revolution to children instead of force-feeding a history lesson or hitting them over the head with it. Children will be awed by the illustrations and will have fun counting the birds, soldiers, priests and nuns, supply trucks, and flags in the book, but they will also naturally ask questions about their stories. The book then becomes a springboard for family conversations and classroom discussions about the EDSA Revolution.

Bumatay's pen and acrylic illustrations for EDSA are overwhelmingly good. There is special use of the color yellow, as the EDSA Revolution is also known as the Yellow Revolution, but the illustrations are mostly black and white to emphasize how the book brings back memories of the revolution. The illustrations are mounted in wooden boxes as dioramas, giving a faint sense of movement and three-dimensionality that completes the book's nostalgic effect. Picture books are children's first exposure to fine art and EDSA is definitely a portable gallery for them.

Click on the image below to see the details of one of the illustrations for EDSA!

I highly recommend EDSA for very young Filipinos and am giving away a copy signed by both the author and illustrator. To join the giveaway, leave your name in the comments section below. This giveaway is open to everyone, no matter where you are in the world. The winner will be randomly selected and announced the evening of Aug. 7.