Cool Melons -- Turn to Frogs!: The Life and Poems of Issa 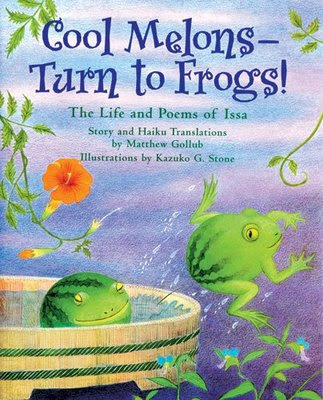 Cool melons --
turn to frogs!
If people should come near.

Cool Melons -- Turn to Frogs!: The Life and Poems of Issa (Lee and Low Books, 1998) is so beautiful that I got teary-eyed the first time I looked through it. This picture book tells the story of Kobayashi Yataro, the haiku master otherwise known as Issa. Issa was born in Kashiwabara, a small mountain village in Japan, in 1763. He liked observing birds and insects, and spent a lot of time playing alone in the woods. It seems natural then that he started writing haiku as a young boy. (Traditional haiku describe a single moment in nature.)

Issa's mother died when he was three and his father remarried when he was seven. Issa and his stepmother didn't get along at all, so when Issa was only fourteen, he was sent away from his home. He went to Edo, which is now known as Tokyo, to work and study under a master poet. Issa's poems were soon being published in books and eventually he took over the master poet's school.

When Issa was thirty, he stopped teaching, shaved his head, donned a priestly robe, picked up a pilgrim's staff, and started a journey in the tradition of haiku poets. For seven years, he traveled around Japan by foot and wrote haiku - and he found great joy in this lifestyle.

Asleep on the ocean --
a folding fan
shades me from the moon.

Finally, Issa returned to his village in time to nurse his father during his last days. And even though Issa still could not get along with his stepfamily, he promised his father that he would settle in the village and start a family of his own there. And there Issa continued to delight in nature, write haiku, and teach students until the day he died in 1827.

The new year's first dream --
I see my village
and wake to a chilly tear.

If you want to learn A LOT more about Issa and his life or about haiku in general, you MUST read Cool Melons -- Turn to Frogs!. Interspersed with Issa's life story are thirty-three of his lovely haiku. Each haiku is also written in Japanese in the outer page margins. Keiko Smith wrote the calligraphy using traditional materials: charcoal, paper, water, and brush. There's also a very helpful and very interesting author's note at the end with lots more information about Issa's work and about haiku in general.

This book has inspired me to have more contact with nature, to reflect more, and to try to write my own haiku. :)