This was originally posted at Into the Wardrobe on August 12, 2009. 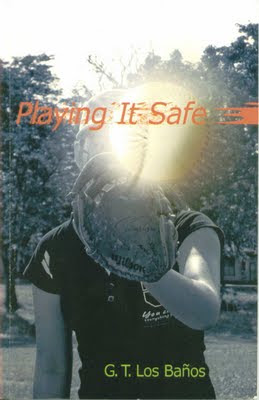 "It all began that day we went up against the Mountaineers for the interclub university softball championship. I guess knocking a girl unconscious with a softball is just about as weird as it gets when it comes to starting any sort of relationship, but anyway, here's how things happened on that crazy, glorious afternoon:

The game was sort of a grudge match: the two toughest organizations on campus, the Mountaineers and my team, the Outsiders, squaring off for the school's interclub softball championship."

Playing It Safe by G.T. Los Baños (Cacho Publishing House, 2007) is about sports, university life, and relationships. It's about Jon Garcia, a sophomore college student on the varsity wrestling team, and Sheila Prado, a member of the same university's varsity swim team, and how Jon falls for and pursues Sheila... Or is about how Jon falls for and fails to pursue Sheila? After all, he does plays it safe. But everything goes Jon's way - until Sheila implies that she wants a bit of traditional Filipino courtship (flowers and the whole works), which Jon doesn't believe in.

For a love story, Playing It Safe is heavy on Jon's exposition, light on action and dialogue between him and Sheila or any other character. And on that note, Jon and Sheila's story has its cheesy moments. But I could not stop smiling while reading. I even had to stop every few pages because I would hunch over laughing. I was so amused and so entertained by Jon's story, and I found Jon and Sheila, their lives, and their relationship so interesting and so refreshing. (There aren't many Filipino YA novels in English about sports, university life, and relationships!) Plus, the writing is incredibly engaging. There's also the fact that Playing It Safe is a fun and accurate portrayal of life on a Philippine university campus. My only disappointment with this novella is all the typos. Apart from the bad proofreading, it is very good!

The ending of Playing It Safe is a real cliffhanger. I can imagine some readers will be dissatisfied with this and burn with curiosity about what happens with Jon and Sheila. I was satisfied with the ending because it raised great questions about, yes, playing it safe in relationships and about whether or not a little bit of traditional Filipino courtship is still desired and/or relevant.


[I bought my own copy of Playing It Safe. G.T. Los Baños was one of my college English teachers. He was so cool and such a good teacher that when my younger brother got to college, I recommended he take Mr. Los Baños' class. My brother really enjoyed his class too!]