Author Neesha Meminger's debut work is Shine, Coconut Moon, an important and interesting young adult novel about the many complexities of family, identity, and living between two cultures.

I've asked Neesha some questions to get to know more about her and her work. Thank you, Neesha, for answering my questions. And thank you very much for Shine, Coconut Moon - my wonderful gateway to learning about Indians, Indian Americans, and Sikhism! 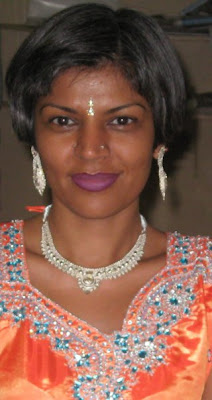 Can you please tell us a bit about your South Asian heritage?

I was born in Punjab, India and we moved to Canada when I was five. I have been in the west since. My parents didn't speak a word of English, so we spoke only Punjabi at home, and only English at school. I think it took me a while to figure out both, but it's where my fascination with the rhythms of language, the importance of word choice, and the power of the word took root.

I was both. I absolutely rebelled, viciously, against traditions and what I then considered restrictive customs and cultural norms, but I was also a lot like Sam - desperate to know more about myself and where I came from. My parents grew up immersed in where they came from. They took it for granted that they were thriving on the land of their ancestors - that they were steeped in the language, food, clothing, traditions, beliefs, and culture of generation after generation before them. I didn't have that. I was a transplant - uprooted and replanted in a very foreign place with no connection to the past beyond my parents. I had to do a lot of digging and recreating to discover who I was. And that was not my parents, nor the world I'd been unceremoniously dropped in. It was something new that I was creating as I went along.

What were you like as a teen reader and writer?

Oh, as a writer, I was very angsty. Very dramatic. In my journals, every event was either the WORST THING IN THE WORLD, or the BEST THING EVAR! (grin)

But as a reader, I loved fantasy like Babbitt's Tuck Everlasting, and realistic teen fiction a la Judy Blume, Paula Danziger, S.E. Hinton, and Lois Lowry. I also inhaled romance novels of ALL kinds.

It goes something like this: An idea hits me and sort of forms into a rough plot structure. I start writing the first chapter and things change in the initial structure. I follow those changes and the story emerges through the characters' wants, needs, and voices. Then I do as Stephen King says - I follow the headlights in the dark as far as they allow me to see until I get to the end.

Why did you write Shine, Coconut Moon? 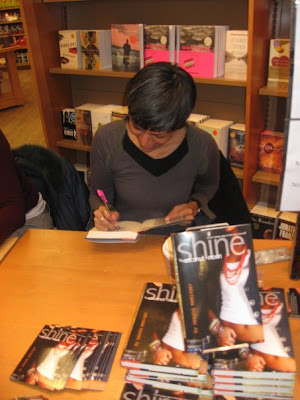 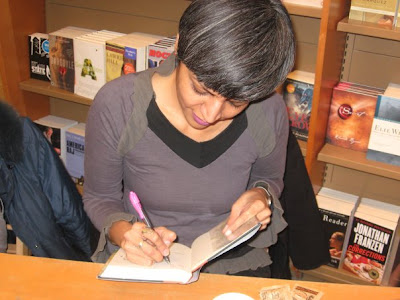 Who are your favorite authors? How have they influenced your writing?

I would have to say some of the authors I've listed above, and then in later years, Octavia Butler, Marion Zimmer Bradley, Elaine Bergstrom, Natalie Babbitt, Jeanette Winterson, and so many more. Reading the works of these authors opened doors for me. The feminists, especially, allowed me to see that it was possible to write stories from a progressive, feminist perspective that looked at power structures critically and envisioned new possibilities. I cherish so many of those works today, even after reading and re-reading them so many times I can accurately quote passages without having to turn to the actual texts. (smile)

You have a BA in Film and Media Arts and your independent films have been screened at international film festivals. How does your background in film influence your writing?

It might make me a more visual writer. Because I've done overnights in the editing studio, trying to tell a story with images, figuring out which one to put next and how long it should be and whether it should dissolve into the one before it or be a straight cut...perhaps that makes me more prone to think the same way when working with text. I still love the combination of text and images. I find the combination to be incredibly powerful.

What books would you like to match or surpass with your own work in terms of writing, awards, popularity, sales, or influence? Why?

My only hope is to contribute to the awe-inspiring work of some of the women I've mentioned above. If my work can have even some of the effect those works have had on me, it will be a success. I'm not as concerned with awards and popularity and all that stuff, honestly. As long as my books find the readers who will cherish them, and in whose lives those books will have a profound impact - that's what will keep me going. 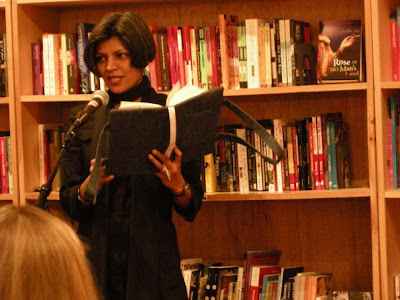 What are your favorite Asian children's and young adult books?

I love Bindi Babes by Narinder Dhami, Born Confused by Tanuja Desai Hidier and I love the works of my fellow authors in the US - Marina Budhos (who has a new title coming out this year), Mitali Perkins, and Uma Krishnaswami, just to name a few. I'm also very much looking forward to reading my copy of Ash by Malinda Lo and Silver Phoenix by Cindy Pon. I do wish there had been more books by Asian authors when I was growing up, but I'm certainly thrilled that there are some out there now!