December 14, 2010
It's time for another illustrator interview! Ladies and gentlemen, let me introduce you to. . . 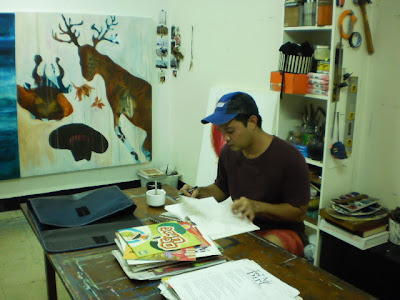 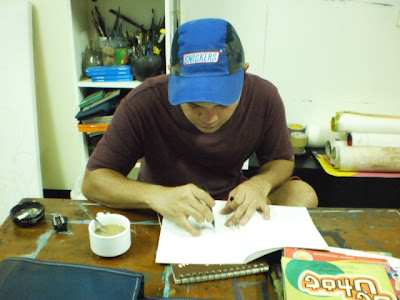 Jason Moss, winner of a Philippine National Children's Book Award for his bright, cheerful, and humorous illustrations in Just Add Dirt, a picture book about a boy who grows vegetables all over his body because he doesn't take a bath, written by Becky Bravo and published by Adarna House in 2009! 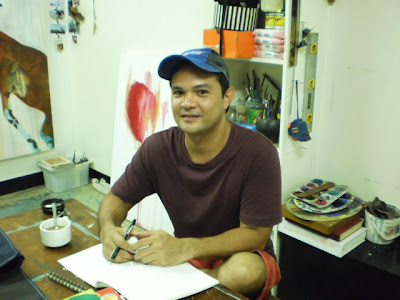 What motivates you to illustrate for children? What is the very best thing about illustrating children's books?

The fact that I'm going to be part of their growing up years as an illustrator. What motivates me is that I'm participating in lending them a dream and further molding their imagination. I say this because I myself, growing up on children's books (both local and foreign titles), said that one day I'll be illustrating myself.

The best thing about illustrating children's books is hearing stories that these kids look at my work over and over again, plus the fact that it's good to know that a lot of parents support Philippine publication, literature and illustration.

What is the greatest challenge from illustrating children's books?

Research and trying to marry tradition and trend to create a classic.

Can you please guide us through the creative process you used when working on Just Add Dirt?

After reading the manuscript three times and scribbling and doodling over it, pushing out the first ideas, etc., I then focus on creating a central image that will bring the book together. With an overview of all the characters I've created, I had to come up with yet another original; this time, an image of a child who lacked discipline. After I've established the best possible image/design for the character which I feel will appeal to children, I create the supporting characters who will complement the manner of illustration given to the protagonist. Of course, the protagonist should stick out from the rest.

I only learned how to read and speak Tagalog in the 3rd grade and up to this point, I still don't know some words. So the first thing that I did was to ask my mom what the other vegetables were, then I googled them as reference.

This is plotting the book: Where the body text comes out and where the illustrations are placed, whether spot, flush left or right, or double spread, bleed or non-bleed.

I have to show one sample of final art and the thumbnails to the publisher for approval before I start creating the final art. When it's approved, I immediately start plotting all of the illustrations and begin an assembly line technique for speed, accuracy and color/style consistency.

I always do this last. I make sure that the title is readable at 3 meters and that there are minimal colors and as many visual elements as possible to attract attention.

What does winning a Philippine National Children's Book Award mean to you?

It feels really good to be appreciated.

One rainy Monday afternoon, I had the privilege of visiting Jason's studio - and felt as if I had found some treasure. Not only was I able to take some pictures of the studio to share with all of you, I was able to go through rough sketches of the illustrations for Just Add Dirt. I took some pictures of those too, of course. :o)

Here are just some of the books Jason has illustrated, laid out on the floor of his studio: 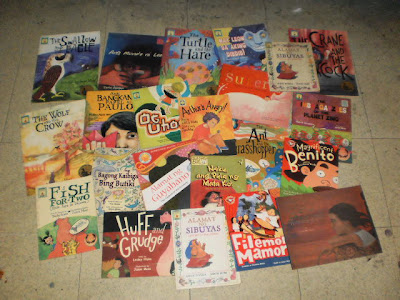 On the walls of the studio: 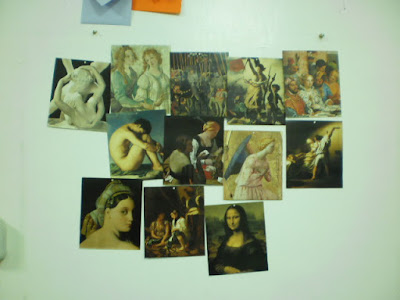 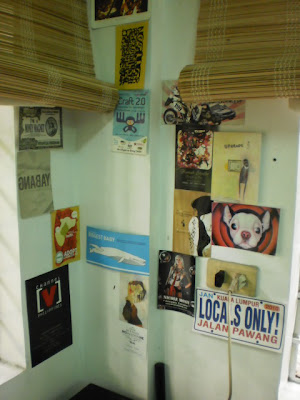 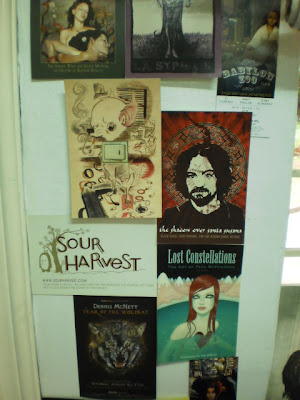 Some of Jason's books: 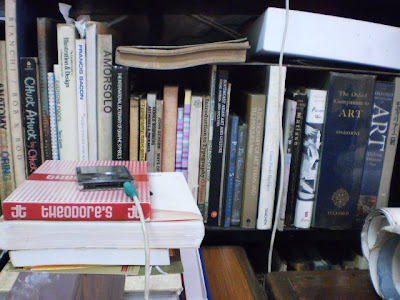 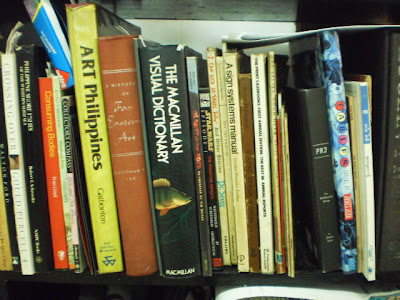 One of his desks: 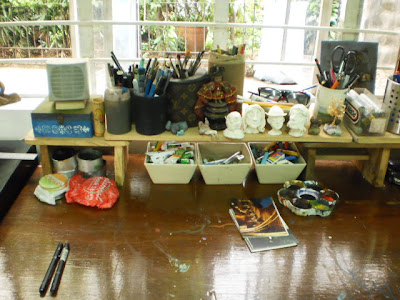 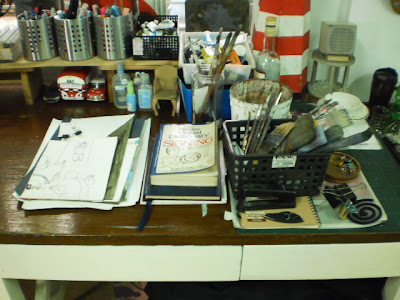 And now some of the notes, research, and rough sketches for Just Add Dirt! 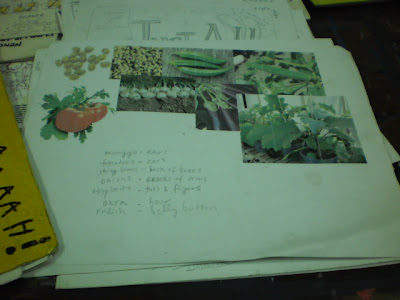 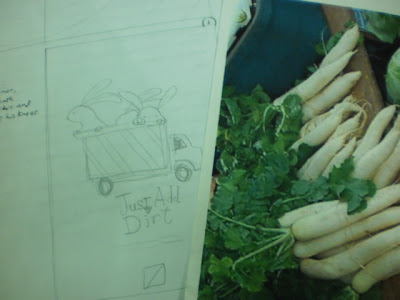 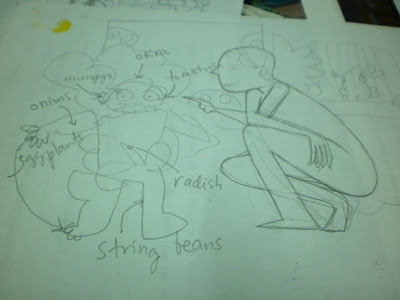 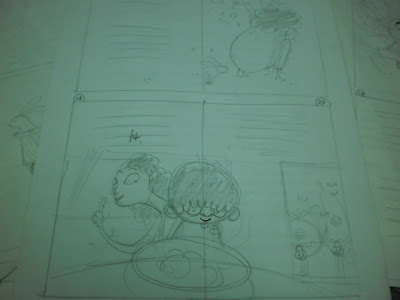 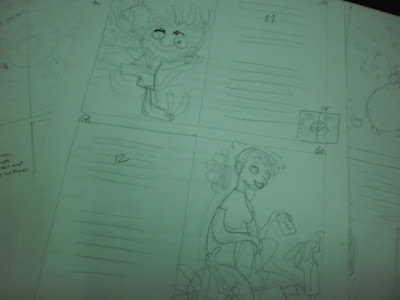 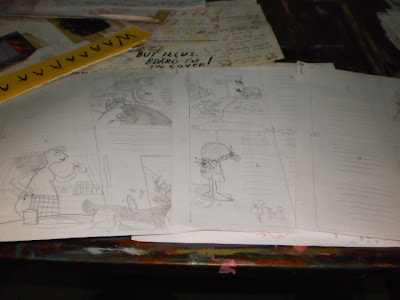 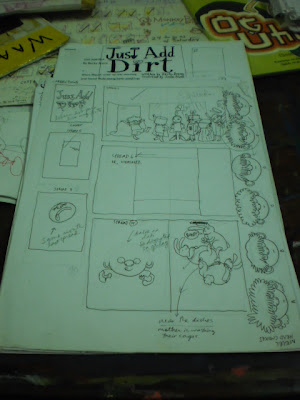 Finally, here is a sketch of the book's cover, followed by the final cover and one of the final illustrations (both images provided by Adarna House): 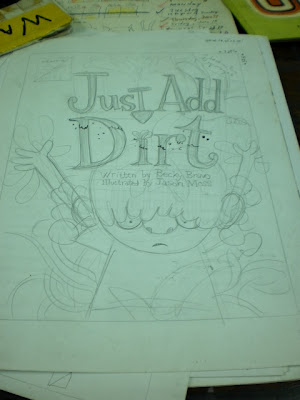 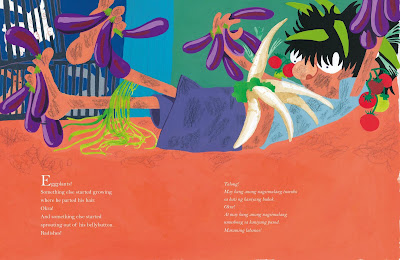 I was awed during this studio visit (Tarie = fangirl). It was my first time visiting an illustrator's studio and my first time going through rough sketches for picture book illustrations (and it wasn't for just any picture book, too). I hope you all enjoyed this post! Let's keep our fingers crossed for more studio visits. ;o) I'll definitely share them with you through this blog.