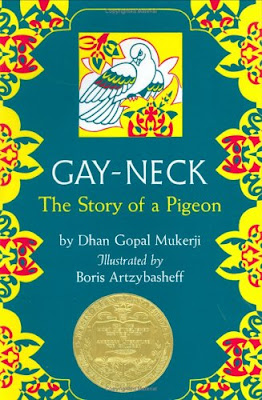 I need your feedback, guys!

In The Essential Guide to Children's Books and Their Creators by Anita Silvey, Linda Sue Park is cited as the first Asian American writer to win the Newbery Medal (for A Single Shard in 2002). But what about Dhan Gopal Mukerji?

Dhan Gopal Mukerji was born on July 6, 1890 in Calcutta, India and he immigrated to the U.S. in his early 20s. He won the Newbery Medal in 1928 for his novel Gay-Neck: The Story of a Pigeon. He was the first writer of color to win the Newbery Medal and is considered the first successful Indian writer in the U.S. He committed suicide on July 14, 1936 in New York City.

Dhan Gopal Mukerji was obviously a resident of the U.S., but it seems he was never a citizen. The U.S. Congress didn't pass a bill allowing naturalization for Indians until July 1946 (ten years after his death).