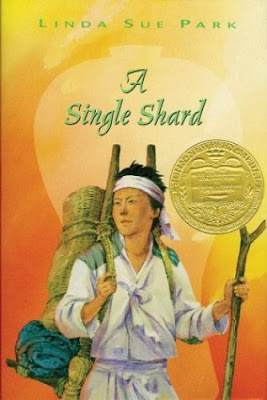 A certain prunus vase is among the most prized of Korea's many cultural treasures. It is the finest example of inlaid celadon pottery ever discovered and has been dated to the twelfth century.

The vase's most remarkable feature is its intricate inlay work. Each of the forty-six round medallions is formed by a white outer ring and a black inner ring. Within every circle, carved and then inlaid with great skill, there is a crane in graceful flight. Clouds drift between the medallions, with more cranes soaring among the clouds. And the glaze is a delicate shade of grayish green.

It is called the "Thousand Cranes Vase." Its maker is unknown.


The passage quoted above is the last passage from A Single Shard by Linda Sue Park (Clarion Books, 2001). I've heard that many stories come about by asking what if questions. I haven't done a lot of research on A Single Shard yet, but I imagine that the author read about the Thousand Cranes Vase, maybe even saw it in person, and started asking what if questions and wondering about the childhood of the unknown potter. The result is the story of an orphan boy called Tree-ear, his friend the old Crane-man, the potter Min and his wife, and the village of Ch'ulp'o, renowned for its celadon pottery. Tree-ear is Min's apprentice and he works hard to help the master potter who dreams of being awarded a royal commission.

Tree-ear, Crane-man, Min and his wife are strong and intriguing characters. Tree-ear especially. Young readers will be rooting for him, his creative aspirations, and his friendships all throughout the book! Tree-ear's story is a good one, and it is one that will have young readers always wondering what will happen next.


[I bought my own copy of A Single Shard.]