Waiting On Wednesday: Never Fall Down by Patricia McCormick 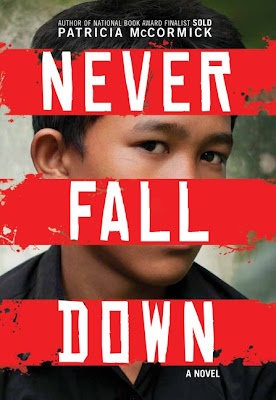 Never Fall Down by Patricia McCormick (HarperCollins/Balzer + Bray, 8 May 2012)

When soldiers arrive at his hometown in Cambodia, Arn is just a kid, dancing to rock 'n' roll, hustling for spare change, and selling ice cream with his brother. But after the soldiers march the entire population into the countryside, his life is changed forever. Arn is separated from his family and assigned to a labor camp: working in the rice paddies under a blazing sun, he sees the other children, weak from hunger, malaria, or sheer exhaustion, dying before his eyes. He sees prisoners marched to a nearby mango grove, never to return. And he learns to be invisible to the sadistic Khmer Rouge, who can give or take away life on a whim.

One day, the soldiers ask if any of the kids can play an instrument. Arn's never played a note in his life, but he volunteers. In order to survive, he must quickly master the strange revolutionary songs the soldiers demand—and steal food to keep the other kids alive. This decision will save his life, but it will pull him into the very center of what we know today as the Killing Fields. And just as the country is about to be liberated from the Khmer Rouge, Arn is handed a gun and forced to become a soldier. He lives by the simple credo: Over and over I tell myself one thing: never fall down.

Based on the true story of Arn Chorn-Pond, this is an achingly raw and powerful novel about a child of war who becomes a man of peace, from National Book Award finalist Patricia McCormick.


You know what I love about the book cover? It shows the boy's eyes. Usually when an Asian model is used for a book cover (or when it's *supposed* to be an Asian on the cover) his/her eyes are not shown. Sigh.


[Waiting On Wednesday is a weekly event, hosted at Breaking the Spine, that spotlights upcoming releases book bloggers are eagerly anticipating.]