Call for Entries: The 2017 PBBY-Salanga Prize 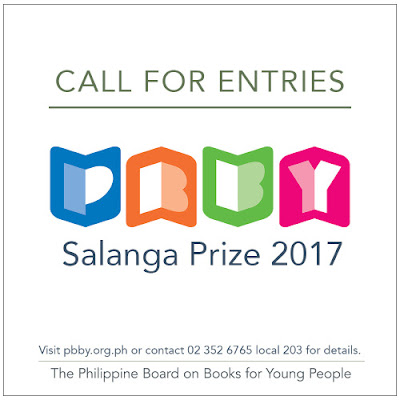 The Philippine Board on Books for Young People (PBBY) is now accepting entries for the 2017 PBBY-Salanga Prize. The contest is co-sponsored by the Cultural Center of the Philippines (CCP) and the National Library of the Philippines (NLP). The winner shall receive twenty-five thousand (25,000) pesos and a medal. Prizes will be awarded in an appropriate ceremony to be held during the celebration of National Children’s Book Day in July 2017.
Contest Rules
Grand prize and honorable mention winners shall be subject to a bidding process to be facilitated by the PBBY, to determine which publisher/s will publish their winning stories.
The winning story will be the basis for the 2017 PBBY-Alcala Prize.
For more details, interested parties may contact the PBBY at (02) 3526765 local 203, or email pbby[at]adarna.com.ph.