November 29, 2009
I love "I Hate My Mother!": Magnetic levitation, a grain of rice & 3 women (Cacho Publishing, 2007), so I feel honored today to be able to interview its author, Perpilili Vivienne Tiongson ("Perpi"). "I Hate My Mother!" is emotionally powerful young adult fiction with an authentic voice. Click here to read my blog post about the novel and here to read my review of it for PaperTigers.org.

Welcome to Asia in the Heart, World on the Mind, Perpi!


Why do you write for young readers?

Why not? I regard this question as if I am being asked, "why invest in the young?" Whether they are readers or not is not as important to me as the fact that they are young. Many have said it in so many ways: The children are our future. So we should invest in them. I have children of my own, and when I think about the world that they will inherit, I have to do everything I can to ensure that it's a world worth passing on. I can't imagine a world without stories. So, whatever I can do to make sure there will be stories for young readers of whatever age, I try to help.

Hmmm. Tricky question. My writing process is still evolving. In my earlier years as a writer, I could never begin on a blank computer screen. I had to do it manually - with pen and paper. After the blank staring for hours, when you eventually get a sentence going, I usually wait till I've written out at least a paragraph or two before transferring to the PC. And always, when I start all over (like continuing to write the next day), I have to read through my previous text, rewriting/revising some, then adding on. Everytime I stop and restart, I read through before adding again. It's a painfully long process, but nothing ever comes out if I just read the last line and add from there. I feel like the reader will know I stopped here and just connected this part later because it's not as cohesive as the other parts. You know like when you don't finish a book in one sitting and you have to put it down and pick it up sometime later? You can't just pick up from where you left off. You kinda have to read a few sentences/paragraphs/pages back just to refresh the plot.

When I think I have all of it down, I put it to sleep. For a day, a week, depending on how much distance I can put between me and the manuscript. Then I read it all over again for one last revision. Sometimes, that means going through the entire process again. Not until I feel like I've got nothing to change do I think it's done, at least from my end.

As for ideas, they come from anywhere. You just have to have discipline to bring a notebook and pen with you all the time and take down notes. You'll never know when they'll come in handy.


What inspired and motivated you to write "I Hate My Mother!"?


A mix of things. It started out as a short story writing assignment. But friends who reviewed it would always say it seems like there's more. So I decided to write it out as a novel. The story became three chapters, until I added more and more chapters, until... In terms of inspiration or motivation, I would say a bit of it is personal. (Which I think answers the next question.) I went through a phase when I thought I hated my mother. And at that time, I felt like I was the only one. So I felt like I had this dark secret that I had to keep lest I was found out. All my friends didn't seem like they were going through what I was going through, and I really felt like I was going to burn in hell for hating my mom. So it's my way of reaching out to people, YAs especially, to let them know that they're not alone. That perhaps they would find their own "resolution" in my book, or in any other YA book for that matter. At the very least, I am hoping YA books are like best friends you can run to.

"I Hate My Mother!" feels so intimate, so intensely emotional. Are any parts of it autobiographical? Where did you draw all that emotion from?

I think like any writer, you can't help draw from your own life. So in a way, yes, parts of it are autobiographical. But I don't mean that scenes or events are exactly as they happened in my life. Like I may use my life to draw parallel situations. For example, in trying to live out the fight between Bell and her mom, I might draw from a different situation where I might have felt intense emotion like a big fight with my sister (whose name happens to be Aileen, not Cory :D).

I do believe that all writers write about themselves, one way or another. Even if for example I were writing about a male character, some parts of that character will echo some parts of me, my personhood. I don't think you can escape that.


What were the challenges and rewards of writing "I Hate My Mother!"? What was the path to publication for the novel?

In the early stages of my draft, one of my greatest challenges was convincing adults that hating your mom was a normal teen phenomenon. And this was at a time when my novel wasn't even titled, "I Hate My Mother!" (The first title was Mother's Grain of Rice.) My adult readers felt HATE was too strong a word. It was a time when many adults still saw YA as an extension of children's lit - safe and sanitized. They feared it would only cause more teenagers to hate their mothers/parents. They could not imagine how a 16 year old could hate her mother so. One of my readers even said, "I hated my mom when I was a teenager, but I don't hate her now." That was exactly my point, I wanted to say. :D

I'm not sure what you mean when you say, "path to publication," but there was nothing extraordinary about the process I took. I sent my manuscript to the publisher, prayed a lot and crossed my fingers hoping to hear what I wanted to hear. I didn't exactly hear it the way I envisioned it. It was more like, "I can publish this, but not in this form." And I was thinking, "ok, what exactly did he mean?" It took almost 4 years of revising based on the publisher's comments before I was formally offered a contract to publish.


What do you hope young readers will experience or take away from the novel?

In my critical essay on YA Novels, I said that YA novels can be a safe place. A safe place to explore, to experience, to experiment. Literature, we say, is vicarious living - living through the experience of others. So let's take advantage of it. If you've never known what it's like to feel strongly about your parents, the book might help. You can feel angry with or through Bell, but hopefully in the end, you'll feel her sadness too, and come to your own realizations through hers. But I don't want to limit it to just hating your mom. It can be about anything - going on an adventure, telling a lie, falling in love... The book just serves as a possibility, an opportunity. 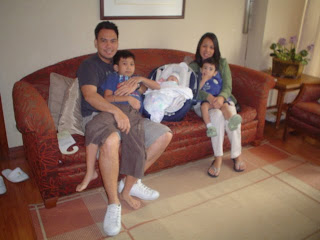 What are your favorite children's and YA books? How have they influenced your own work?


Believe it or not, I started my love for reading through horror/suspense books and films. Peter Straub, Stephen King, Agatha Christie... I even had a crush on Peter Cushing ( I thought he looked more vampish than Christopher Lee). This was when I didn't really know about YA lit. When I discovered YA, I liked Robert Cormier, Lois Lowry.. Nowadays, I like the books for younger readers (maybe because of my kids!). [Ed. note: Check out the picture of Perpi's beautiful family on the right!] Maurice Sendak and Dr. Seuss will always be on my list. But there are so many others. There's also the local writers like KUTING [a group of Filipino children's book writers]...

Because of this mix of horror and children's, I think my writing always has that dark side to it, which I hope I get to mask in humor.

What are you reading now?

I am trying to read L'Engle again. I've been wanting to write a sci-fi or fantasy for boys.

Currently, I am working on a short story for intermediate readers. I am also hoping to work on a collection of narratives I wrote several years ago. But soon, I would like to get started on a sequel to "I Hate My Mother!".


I would love to read a sequel to "I Hate My Mother!" Perpi, thank you so much for taking the time to answer my questions about your novel.