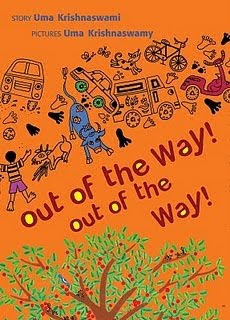 Out of the Way! Out of the Way!, written by Uma Krishnaswami and illustrated by Uma Krishnaswamy (Tulika, 2010), is the story of a boy, a baby tree, a village path in India, and how they grow together. The boy grows up and becomes a father, then a grandfather. The baby tree grows into a giant tree. The village path grows into a city road. In contrast to what the title of the book suggests, the three never get in each other's way. They live together in harmony.

This harmony is also seen in the layout and illustrations of the book. Each spread has ample white space set off by illustrations inspired by Indian folk art. The many, many details in the illustrations will definitely draw young readers in. They will enjoy discovering new things each time they pore over the illustrations. The illustrations are mostly in color, but are very nicely balanced with black and white portions.

What story could it be?
View more presentations from Tulika Books. 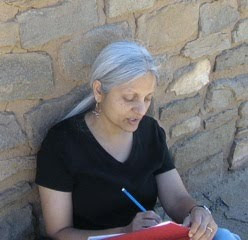 Today, I have the great honor of hosting and interviewing the author of Out of the Way! Out of the Way!, Uma Krishnaswami. She is the author of several books for young readers and a teacher for the MFA in Writing for Children and Young Adults program at the Vermont College of Fine Arts in the U.S.

Please, tell us: Why do you write for young readers?

I write for young readers because those seem to be the stories that show up in my mind. I don't think much about audience when I'm writing a draft. It's hard enough to track down and nail a story without having to worry about the audience. Afterwards, once I've written a few drafts I get a better sense of who they might be. Sometimes the rhythm of a story will just make itself clear--in the case of Out of the Way! Out of the Way! the story felt young from the start. It had a young character in it, and even in early drafts it showed up in sequential scenes. They weren't all scenes that stayed in the final version but they had the momentum of a picture book.

I suppose in some ways I write for the young reader I was. Reading was very important to me in my growing years, and I constantly read and reread the books I owned and tried to get my hands on as many as I could. I was hungry for story, and I think children today are still hungry for story.

Here's a picture of me as a small child looking closely at--well, geese, but I paid that same attention to small green things as well! 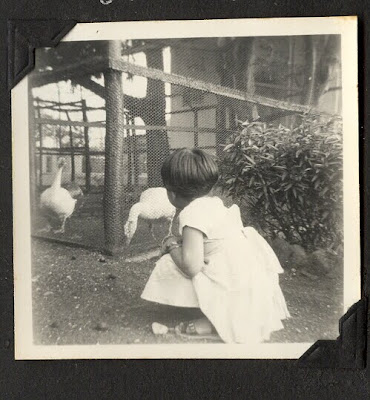 That is such a beautiful picture, Uma!

No two books are ever the same. Each has its own journey. Mostly however they do all start out with small fragments, a word or two or a mental image, sometimes a single event, sometimes just a glimpse of a character. Then it's my job to make sense out of that image, to pin down that character or to follow the logic of the event. I don't always feel as if I control all of it, but what I do control is the discipline of showing up to the work again and again even (or maybe especially) when things aren't going well.

In this case the story began with the image of the boy looking at the green growing thing in the road. And it came from many sources, some of which were from memory, from my own childhood, some from conversations I had with my father.

I began it in longhand in a notebook, then went to the keyboard when I was thinking too fast for my handwriting to keep up with me. It grew over about twenty revisions. It grew large, then too large, and had to be pared down. Some of the things I cut out ended up leaving traces in the story. For example, one version had a whole lot of animals showing up beneath the tree. They had to go. There wasn't room for another whole subplot with them. The words "and animals too..." stayed behind in the text. In interim versions the boy had a father, mother, and grandfather and we met them all. That changed. They're still there but the focus is on the road and the tree. There was more conflict in some versions. People showed up to cut the tree down. That changed.

Some of those earlier versions gained me some comments from editors in the U.S., editors whose opinions I respect, who all picked up that it wasn't quite working, and suggested that perhaps there wasn't enough of a story there. And in the meantime the picture book market in the U.S was getting tougher, so when I talked to the people at Tulika about the story and they were interested I decided to see if I could get some comments from them. I figured whether or not they published it, they'd maybe give me some feedback that would help me rework it. And as it turned out, it was a really good fit. Their view of the book and mine came together really well. In some ways they helped me get back to the core of the story, to the tree and the road with the boy as witness.

I think those are two very different questions. Why did I write this story? Because it wouldn't leave me alone. The boy showed up and the sapling showed up and I had to do something with them. What do I want young readers to take away? I think the notion that people and nature don't have to be in conflict, that if we make room for the natural world it will in return give us gifts, many times over. Birds and shade, a place to meet and play and rest--all this comes about because of one small action on the boy's part.

I love Ruskin Bond's books. They are such an affectionate portrait of a very particular region and people. He never patronizes the reader.

I think Salman Rushdie's Haroun and the Sea of Stories is brilliant. Among picture books, Tiger On a Tree by Anushka Ravishankar and My Mother's Sari by Sandhya Rao are both simple and effective for very different reasons. I've just discovered Nury Vittachi's work. I think The Day it Rained Letters has quirky, funny, impressionistic characters in a fabulist word reminiscent of The Phantom Tollbooth. I'd like to see more but his books aren't easy to come by in the U.S.

I'd pick up a book by these writers for lots of different reasons. There's a heart to each of their work, something that resonates even after the book is closed. And whether that comes from humor, the longings of characters, dramatic tension, or setting, it's there, and it's memorable. What I finding myself looking for is story first. The cultural context and any lessons from it have to be secondary to the story.

Thank you so much for answering my questions, Uma!

Chicken Spaghetti
Through the Tollbooth

Asia in the Heart, World on the Mind
PaperTigers