August 28, 2010
It says "Part 2" up there in the title because this is actually my second interview with Sergio Bumatay III, Filipino artist, graphic designer, and illustrator. Thank you, Serj! You can click here to read my first interview with Serj. =D In the first interview, I asked him about his influences and his creative process and I hope that serves as a good introduction to his truly amazing work.

For this interview, Serj and I focused on his illustrations for the Philippine National Children's Book Award-winning picture book Tuwing Sabado, which was written by Russell Molina. (Click here to read my interview with Russell Molina and here to read about Tuwing Sabado and the Philippine National Children's Book Awards). For this interview, Serj also gave a tour of his studio (which he calls his play room)!!

What did you most like or find most interesting about Tuwing Sabado?

Aside from the big surprise towards the end, the story is interesting because everything is well put together: the joys of counting as play is integrated and it echoes through the poetic style of the narrative. Counting was also significant in the father's poignant situation. I also wanted to capture that essence in my illustrations. 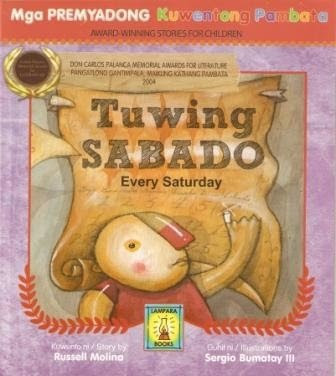 What effect or impact were you aiming for when you were working on the illustrations for Tuwing Sabado?

I wanted the visuals to look easy and stark, to draw the readers to the story. My initial study for the layout was very claustrophobic, as if the visuals as well as the text were enclosed within a box. Within the challenge of maintaining the suspense of unveiling the story's plot, I could only focus on the characters and their personal moments as found in the story. The characters' images were inspired by birds, particularly the puffin, to symbolize freedom. The characters look colorful, soft, and happy and yet there is a bit of sadness that can be perceived through their simple eyes. 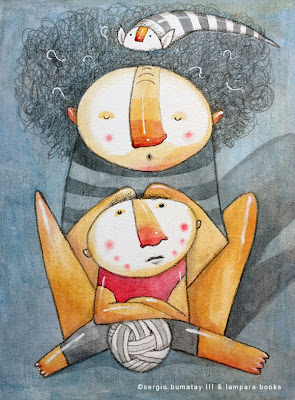 Were there specific challenges to illustrating Tuwing Sabado? How did you overcome those challenges?

The major challenge was deciding on how to render it: whether realistic or whimsical. I ended up choosing the whimsical style to soften the mood of the story; I felt the issue being tackled connoted a very serious tone. Rendering it whimsically also created a timeless mood and setting. Another challenge was how to depict the father's clothes without giving the clues away. I thought that if I was going to depict the clothes that were worn here in our country that would have destroyed the twist, since the book would be read mostly by Filipino children. The uniform is so identifiable that everyone can understand what it means. So I thought putting him in a universal and classic "uniform" would perhaps do the trick. 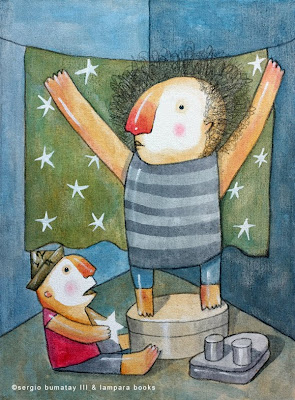 I really appreciated that about Tuwing Sabado! It has a pretty serious theme that was balanced by the whimsical illustrations.

What does your National Children's Book Award mean to you?

The NCBA is a recognition of the hard work and dedication I place in each children's book that I illustrate. It is an inspiration for me to work harder and it reminds me that there are really so many possibilities in my chosen field. It makes me feel proud and pressured that my work as an artist too is very important and special.

I work most of the time during afternoons until midnight, sometimes earlier, if I don't have errands at home. Home matters/errands usually take up my mornings. I usually don't like routines, sometimes I break it up by going outside. Whenever I sketch or think a lot of things, I go to other parts of the house, since my room is claustrophobic as it is.

Music does make a big difference in the mood, it keeps me up. I mostly listen to local pop music, though I also have varied interests. While working on illustrations, I don't really have a special ritual. But when I'm thinking of concepts, compositions, or thumbnails, I'm most productive when I'm lying in bed or sometimes before I sleep.

How would you describe your studio?

The place is a very small room, quite claustrophobic actually, because of the stuff I have accumulated: books, art, art materials, and other curios. Most often it is cluttered, especially when I have several deadlines at a time. The room isn't my dream studio yet, as our house is still in progress. I would have liked it to be more spacious, with lots of natural light, and well organized. I used to love the scene outside my window: the big acacia tree and open space was inspiring. Now the tree is gone and a new house filled up the space. 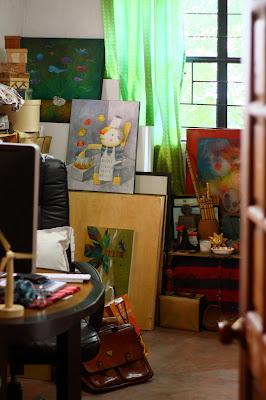 Here's a peek into my two and a half meters by four meters humble play room. 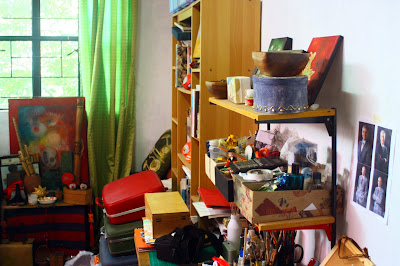 This is the right side of my humble room, where my drawing and painting table is, and a big shelf full of books and some toys. 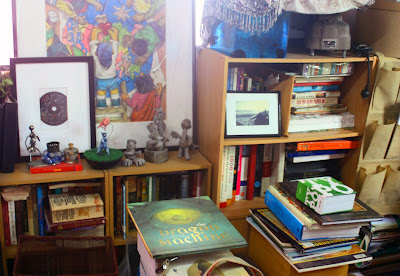 This is the left side: more books. The colorful artwork at the back is my award-winning poster for UNESCO. 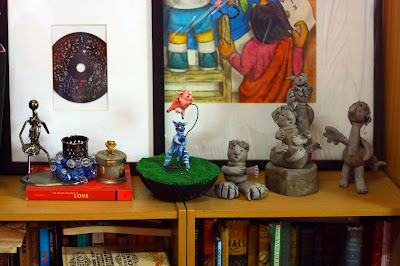 The three sculptures at the right were supposed to be studies for Tuwing Sabado, but I decided to make a few more as "stand alone" toys instead. The one in the middle is another experimental sculpture. 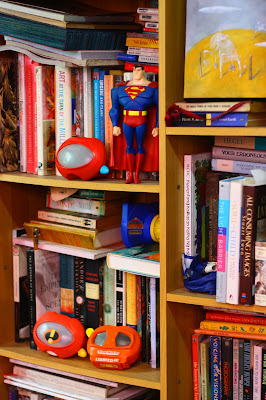 Books, books, and more books. I love to collect these 3D viewers, so far I have seven pieces and they never fail to amaze my niece and nephews.

These are the books I use for inspiration:

1. American Era Photographs 1900-1930: A Philippine Album by Jonathan Best
2. Nora's Stars by Satomi Ichikawa
3. Joseph Cornell: Master of Dreams by Diane Waldman
4. A to Z Picture Book by Gyo Fujikawa
5. Araw sa Palengke by May Tobias and Isabel Roxas [Note from Tarie: This is also a recipient of the Philippine National Children's Book Award!]

Actually most of my books are very interesting, but the ones on this list are the first in mind whenever I'm thinking of a concept for a new project. 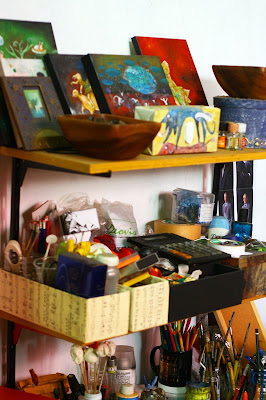 My painting/drawing desk. Sometimes, when it gets too cluttered or I'm doing large artworks, I paint on the floor or outside the house. 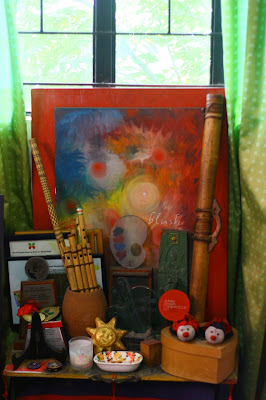 Little altar where I place all things of goodness.

Serj, thank you SO much for answering my questions and for showing us your play room!