See You in the Cosmos by Jack Cheng 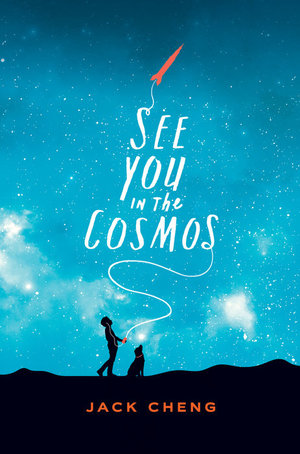 See You in the Cosmos by Jack Cheng (Dial Books for Young Readers, 2017)

"My name is Alex Petroski and my house is in Rockview, Colorado, United States of America, planet Earth. I am eleven years and eight months old . . ."

Filipino American Alex Petroski LOVES astronomy. His hero is Carl Sagan, the astronomer who sent a "Golden Record" out into space. In 1977, NASA launched Voyager 1 and Voyager 2. In case the spacecraft ever made contact with extraterrestrial life forms, or future humans, each had on board a "Golden Record," a copper phonograph LP featuring a collection of sounds and images meant to portray the life and culture on planet Earth. The recorded sounds included things like wind, thunder, bird songs, greetings in 55 languages, and the brainwaves of a woman in love. (You can actually listen to the audio of the Golden Record here.)

Alex has built his very own rocket, Voyager 3, and plans to launch it into space at SHARF (Southwest High-Altitude Rocket Festival) in Albuquerque, New Mexico. On board Voyager 3 will be his "Golden iPod," which includes everything on the Golden Record (because what if the extraterrestrial life forms don’t have record players??), more sounds from Earth, and recordings from behind the scenes of his rocket launch.

Alex cooks three days’ worth of food for his mom, goes up to her bed, and whispers in her ear that he loves her and will be back after the rocket festival. He heads to the Amtrak station with Carl Sagan – his dog named after his hero. He’ll take the train to Albuquerque and carpool with some other Rocketforum.org members to the SHARF site. He is so excited! This is his chance to tell the universe about humanity!

“I wonder what you’re going to think when you listen to these recordings, when you hear the sounds of a boy from planet Earth trying to be brave and a boy trying to find the truth, and a boy who loves his family and friends and his dog that he named after his hero."

Attention all Filipino teachers and librarians: I highly recommend See You in the Cosmos for your classes, book challenges, and book clubs! This well-written, heartwarming middle grade novel is so ripe for discussion. For example, it's a great introduction to the classic American "road trip plot," made a little bit more relatable to our students because it is by a Chinese American author and features a Filipino American protagonist. See You in the Cosmos is also a great introduction to "voice" in literature. Oh my goodness, Alex’s VOICE. It’s the best thing about the novel. You can FEEL Alex’s love for his deeply troubled mom, absent older brother Ronnie, and astronomy. Alex is honest, inquisitive, and brave . . . He sounds so REAL. How did Jack Cheng do that? It would be very interesting to analyze his craft with students.

Below are a few class, homeschool, and book club activities inspired by See You in the Cosmos.

Along with See You in the Cosmos, students can read and discuss Can We Live on Mars?, an educational and entertaining middle grade book of facts and activities about space. This National Children’s Book Award winner locates the Philippines and Filipinos within the constellation of achievements in astronomy. Alex Petroski would love it!

“Have You Heard the Joke About the Astronomer and the Observatory?”

A Time Capsule of Humanity

Carl Sagan’s Golden Record was meant to portray the life and culture on planet Earth in 1977 to extraterrestrial life forms or future humans. The Golden Record included 115 images of things like plants, insects, animals, architecture, and people going about their daily lives, and 90 minutes of music from artists like Mozart, Stravinsky, and Blind Willie Johnson.

Blast Off to a Party!

Alex’s favorite movie is Contact, the adaptation of Sagan's science fiction novel of the same title. Click here to watch the trailer. I remember watching this excellent movie as a kid – I loved it.

I hope you have fun reading and discussing See You in the Cosmos with your students. :)