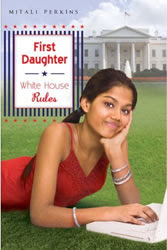 Meet sixteen-year-old Sameera Righton, aka Sparrow, the likeable and very interesting main character of the First Daughter books. Sameera was born in Pakistan and was adopted by an American political family. She grew up as a diplomat's daughter, in communities where people from different cultures and races mingled without much fuss. She is sophisticated and articulate, fierce and opinionated. Sameera is an aspiring journalist and is well on her way to fulfilling her dream of becoming a writer. She has a very popular blog, www.sparrowblog.com, that is read by powerful people in America and by people all over the world. And her dad, James Righton, is now the president of the United States.

(By the way, I highly recommend you check out that link! Sparrowblog really exists as a character blog for the First Daughter books. How cool is that?! :o) On the site, Sameera dishes about the real US presidential candidates and their kids.)

Sameera, her dad, her mom Elizabeth Campbell Righton, and her cousin and best friend Miranda Campbell move into the White House. Sameera, her almost-too-good-to-be-true parents, and Miranda have to get used to being the First Family. There are, of course, heavy responsibilities. There are many rules to follow. And there are lots of press people who make privacy almost impossible.

This book is actually a very light read overall. But it is not just about Sameera and Miranda exploring the White House, redecorating Camp David and the living quarters on Air Force One, and attending fancy parties. First Daughter: White House Rules also touches on important topics like race, culture, and religion. Obviously, Sameera is fusing two distinct cultural identities. And not everyone is happy that there is a non-white member of the First Family. Then there is Sameera's romantic interest, Indian American Bobby Ghosh. Sameera does not practice Islam, but she is Muslim by birth. Bobby's family is Hindu and Bobby's grandfather has a grudge against Muslims because his brother was killed by Muslims during the war and his family lost their jute farm in India when their village was taken over by Muslims. Bobby's super strict parents forbid him from seeing Sameera. Bobby's very ill grandfather would get upset if his grandson dated someone Muslim by blood. Race, culture, and religion, and other relevant topics like economic status, are touched on in several other ways in the novel - but never in a preachy way.

First Daughter: White House Rules is a fresh read. It is also a really fun look into a tight-knit and great family and into the perks and challenges of being the First Daughter. In fact, the book was so much fun that I was sad when I reached its end. At least I can backtrack and read First Daughter: Extreme American Makeover, the first book in the series, and I can look forward to more books in the series! 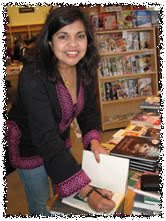 About the Author: Mitali Bose Perkins was born in Kolkata (Calcutta), India. Her name means "friendly" in Bangla, which she tried to live up to because the Bose family moved so often – they lived in India, Ghana, Cameroon, London, New York City, and Mexico City before settling in the San Francisco Bay Area when she was in middle school. Mitali studied political science at Stanford University and public policy at U.C. Berkeley, surviving academia thanks to a steady diet of kids’ books from public libraries and bookstores. She went on to teach middle school, high school, and college students. Mitali lived in India, Bangladesh, Thailand, and California with her husband and twin sons before the Perkins family moved to Newton, Massachusetts, where they live now. Visit her at: www.mitaliperkins.com.