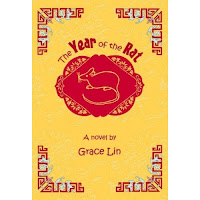 The Year of the Rat, a semi-autobiographical novel written and illustrated by Grace Lin, follows a year (one Chinese New Year to the next) in the life of Pacy, a young Taiwanese American. The Year of the Rat is the first year of the Chinese twelve-year cycle and therefore it symbolizes new beginnings. The Year of the Rat is the time to make a fresh start and to change things. And Pacy does experience important changes during the Year of the Rat: her best friend Melody moves away, there's a new boy who is the only other Asian in her elementary school (aside from her sister Ki-Ki), her favorite cousin Clifford gets married, and she starts doubting her dream to become a writer and illustrator. Pacy does not like most of the changes the year brings.

I found The Year of the Rat a refreshing read because it is simple, innocent, and unpretentious (though at times it is corny); and because for the first time in a long time I was reading children's literature I could really relate to.

As an Asian who grew up in the United States, I could relate to Pacy's confusion and the prejudice she encounters. I kept getting flashbacks while reading The Year of the Rat. For example, Pacy remembers that in kindergarten her classmates Kurt and Rich would stretch their eyes with their fingers and chant pretend Chinese at her. That's happened to me - and I'm not even Chinese! Pacy says: "Sometimes, I felt like I was more than one person. At home, everyone called me Pacy, my Chinese name, and at school, everyone called me Grace, my American name. At times I wasn't sure which person I was supposed to be-Taiwanese Pacy or Chinese Pacy or American Grace." I've certainly felt that way before!

(Some reflection inspired by Asian Pacific American Heritage Month and Fusion Stories: I was talking to my best friend CY - who got back from the U.S. in December - about how Filipino Americans have two homes: the U.S. and the Philippines. She agreed that we would never feel 100% at home in the U.S., but neither would we ever feel 100% at home in the Philippines. As another Fusion Story writer, Mitali Perkins, puts it: it is life between cultures.)

I was a little sad when I finished reading the book. It's a short novel (with cute illustrations!) that I didn't want to end. I want more stories about Pacy and her family and friends! The Year of the Rat is the sequel to The Year of the Dog, which, unfortunately, I haven't read. So I guess I'll work my way backwards and read that soon! :o)

About Grace Lin (photo and bio from her official website): Grace Lin is the author and illustrator of more than a dozen picture books, including THE UGLY VEGETABLES and DIM SUM FOR EVERYONE! Grace's first children's novel THE YEAR OF THE DOG was released with glowing praise. While most of Grace's books are about the Asian-American experience, she believes, "Books erase bias, they make the uncommon everyday, and the mundane exotic. A book makes all cultures universal." See more about Grace and her work at www.gracelin.com.