Korean American Nick Park moves to Renfield, Connecticut just in time for the third grade. He is the new kid in Crying Stream Elementary - all the other kids know each other already - and the only Asian student. He has absolutely no friends for almost a year and I think this traumatizes him for life. Nick becomes obsessed with fitting in and being accepted.

Nick lies to get his peers to start paying attention to him. He tells Will, Mitch, and Paul, three other boys in his grade, that he is a kung fu master and they beg him to teach them kung fu. Nick teaches Will, Mitch, and Paul martial arts moves he makes up and becomes friends with them. He even starts believing that he is a true kung fu master and starts giving "kung fu lessons" to other kids in his school.

In the third grade Nick discovers girls. Then all throughout elementary school, middle school, and high school he is obsessed with the opposite sex. There are times Nick has a chance to be in a romantic relationship, but he always screws things up with the girl big time. Like the time in the eight grade when Paige Cooper wants him to be her date for Class Nite. He finds out she wants to be his date three weeks before Class Nite, but he tries to ask her out less than thirty minutes before Class Nite begins. Of course by the time Nick calls Paige's house she has already left for the dance. Or the time he went out on a date with Sam Foley during his sophomore year in high school but afterwards Sam hates him for lying and telling his friends that he got to third base with her. Nick is crazy about girls, but even more concerned about his popularity - or lack thereof. He cares more about being popular than about forming real connections with his peers. Still, he messes up all his efforts to become popular.

Nick is a banana, "yellow on the outside, white on the inside." He thinks it is his Asian heritage that is keeping him from becoming popular and from "scoring with the girls." He wants to be just like everyone else in his 99.9 percent white school. He doesn't like eating Korean food. He can't stand other Korean guys. He finds Korean girls unattractive. He refuses to go to a Korean church or hang out with other Koreans his age. He hates all things Asian. He is even embarrassed by other Asians and doesn't know how to react when he sees another Asian. Nick's parents and other Koreans find Nick "too white," while his classmates find him "too Asian."

Girls for Breakfast was painful for me. It's about being lonely and desperate to be cool. It's about being different and confused about one's identity. Nick was annoyingly insecure and immature, and a very real, complex, and believable main character. Girls for Breakfast was able to elicit a lot of emotional reponses from me. I could literally feel Nick's loneliness, confusion, and misery while reading and I was reminded of my own awkward and painful adolescence. 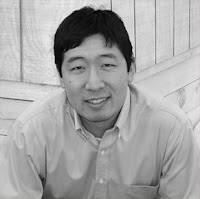 About the Author: David Yoo is the author of the novels GIRLS FOR BREAKFAST, which was named a NYPL Best Book for Teens and a Booksense Pick, and the forthcoming STOP ME IF YOU'VE HEARD THIS ONE BEFORE (Hyperion, Sept. 2008). He has published fiction and nonfiction in several anthologies, most recently in WHO CAN SAVE US NOW? (The Free Press, 2008) and GUYS WRITE FOR GUYS READ (Viking). David teaches adult fiction workshops at the Gotham Writers Workshop and writes a monthly column in Koream Journal. To learn more about him, visit www.daveyoo.com.